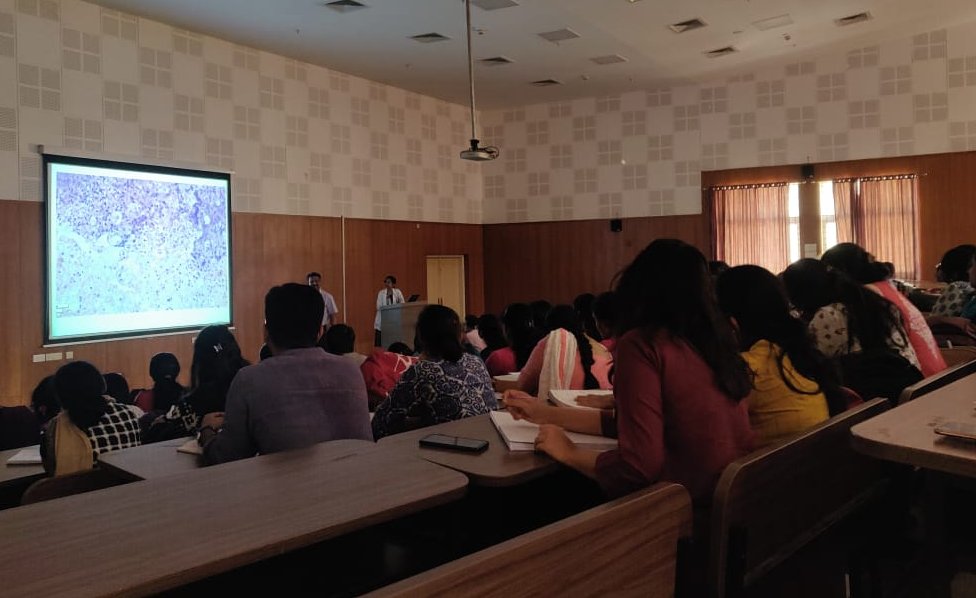 The Interactive slide seminar session was held on 29 th December 2018 at Cauvery lecture hall, BMCRI.
The programme started at 2.15 pm following the arrival of Dr Tejasvi Krishnamurthy, Professor, Department of Pathology, KIMS, Bangalore, Treasurer and observer from the KCIAPM.
Total of 115 participants from the various medical colleges attended the programme.
The programme started with welcome speech by Dr Dayananda S Biligi ,Professor and HOD, Department of Pathology ,BMCRI. It was announced that postgraduates who presents with best description of the slide will be awarded a prize which will be judged by Dr Dr.Thejasvi Krishnamoorthy, Professor, Department of Pathology KIMS ,Bangalore and Dr M Natarajan Professor , Department of Pathology BMCRI.
Mr Rohit, CEO (Morphle )and Sowmyadeep Mukherjee staff of the Morphle technologies were present in the programme . Mr Rohit spoke about the digitalization of the slides using Morphle and its applications in telepathology, IHC and slide banking.
A total of 10 histopathology slides were discussed. 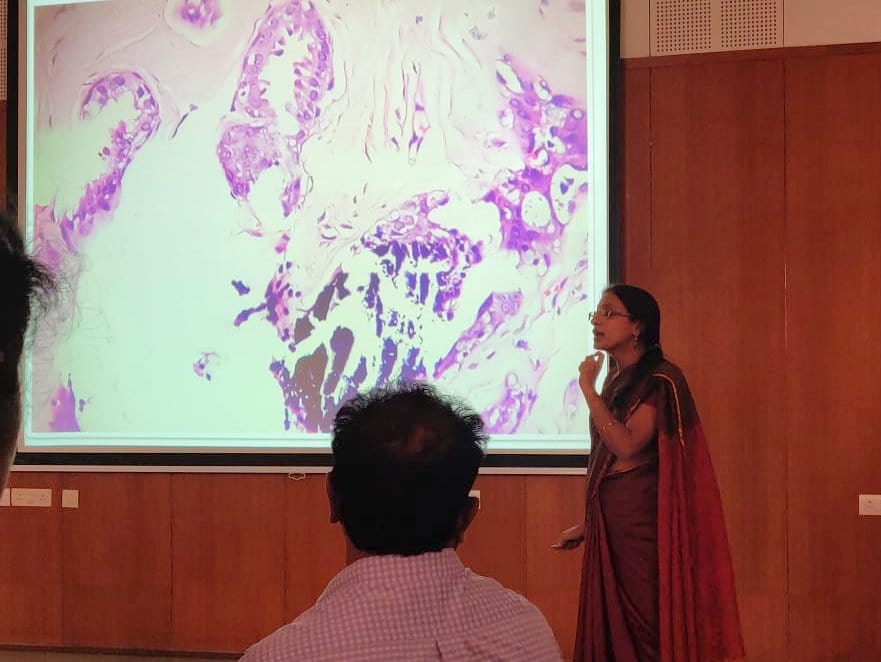 The first two slides were discussed by Dr Nirmala C, Professor, Department of pathology, BMCRI. A couple of post graduate volunteers were invited to describe the slides and present their observation. Different components in the mixed germ cell tumor which included yolk sac tumor, chorocarcinoma, teratoma, embryonal carcinoma and dysgerminoma were highlighted in the slide. A final diagnosis of Mixed germ cell tumor was made. An insight into various IHC markers useful in confirming diagnosis was described. The second case was diagnosed as Mammary analogue secretary cell carcinoma which emphasis on different patterns of tumor arragment.
Slide number 3 which was a rare case of pulmonary alveolar microlithiasis was discussed by Dr Sujatha Metan, Asst professor, Department of pathology , BMCRI following descriptions given by the postgraduates.

The slide number 4 was discussed by Dr Ashwini.BR, Asst professor, Department of pathology, BMCRI which proceeded with good interactive session with post graduates. Few insight about the basics and diagnostic dilemma in breast lesions were given to the post graduates and diagnosis of Complex fibroadenoma with atypical ductal hyperplasia was made.
Next six cases were discussed by Dr Dayananda S Biligi, Professor and HOD, Department of pathology ,BMCRI. Following a brief description by postgraduates, differentiating features between myxofibrosarcoma and fibromyxosarcoma was dealt in detail.
The next two cases of sebaceous carcinomas were discussed in depth with reference to various morphological presentation and differential diagnosis. The various points raised by the postgraduates during the description were discussed and answered especially the differentiating feature between benign and malignant tumors. Utility of IHC marker EMA in differentiating sebaceous carcinoma and hidradenocarcinoma was highlighted.

Slide number eight was described beautifully by the postgraduate and was followed up by an extensive discussion by Dr Dayananda with an emphasis on approach to diagnosis of spindle cell lesions along with specific IHC markers and final diagnosis of Solitary fibrous tumor was made.
Slide number nine and ten was explained in detail and differential diagnoses were discussed. Finally arrived at the diagnosis of syringoma and chondroid syringoma.
This was followed by a prize distribution to the best presenter from the postgraduate who was declared by judges. The best presenter award was presented to Dr Ayesha , postgraduate from the ESIMC, Bangalore for her best description of slide number 8 – Solitary fibrous tumor. All the participants were given a certificate of participation.
This was followed by Hi-tea and the gathering dispersed at 5pm.